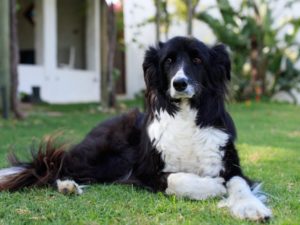 Kai is a sensitive soul. He loves people and loves to greet loudly with loads of gusto. Kai joined our family in 2013. He came from Kayamandi and was found walking around the town with a broken leg. It took the inspectors of the Stellenbosch animal welfare a few weeks to catch him as he was very scared of them.

We adopted him from them as Aileen wanted me to have a friend to exercise with. Little did she know that Kai was just as lazy as me. He is definitely a ‘fake’ Border Collie. It has been hard to love Kai as he would pee all over our feet when we called him in for food or to sleep inside. We started him on a SIT program to give him the tools to know how to interact with people. It took 2 years for him to have enough courage to not pee on our feet.

It is sad to live with a family member that is scared of you. After trying without medication for 2 years we could not take it anymore. He had improved but not enough to cope. He was still not happy and it broke our hearts to see him living in fear. We decided it was time for him to be put to sleep but we wanted to try one more thing. So we started Kai on medication that would help him to cope.

He has continued to improve and he is coping well now. He even plays with Finn every now and then. He loves walks and training sessions. We don’t train him much anymore as he has bad arthritis in his hips and is on chronic painkillers for that. Like all of us, he has his bad days from time to time.

Kai does not like doing anything he does not want to do and if you pick him up or try to stop him from going through a door/gate he will scream as if you are killing him.

He plays in the morning and loves sleeping near the fire on his bed at night. He likes to chase squirrels and loves the beach.

If you want to pat Kai be gentle as he is a gentle soul and will run away if he is scared of you. He likes woman better than men.