Ooc chose us in the way that only cats can. At the beginning of February 2016, our fluffy baby, Rosie disappeared from our cottage in Klapmuts. We were devastated and searched for her for weeks before resigning ourselves to the fact that she had probably fallen victim to a rooikat off the Simonsberg. Olive was missing Rosie as much as we were but we just weren’t ready for another cat. But mid April, a colleague came to my office with a kitten that she had found in the parking lot asking if I would look after him until someone claimed him. 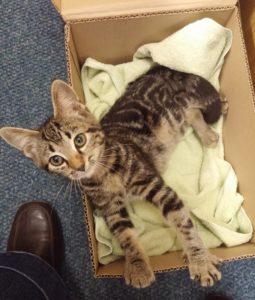 He was the sweetest, most friendly little boy and made himself at home in my office. He came with us to work every day for 3 weeks while we tried to find his owners but to no avail and Vincent suggested that we just keep him. I didn’t want to and Olive was just as unhappy with the new addition to the household but Ooc just took it in his stride and wormed his way in bit by bit. His unusual name is actually 00Cat for the circular markings on his flanks but we shortened it to Ooc and he happily accepted his new title.

Slowly but surely, he settled in – he and Olive started playing together and one evening I caught her holding him and aggressively licking his head almost as if she was saying ‘He’s no replacement for Rosie but if he’s going to stay he needs to be clean’. A few months later we adopted Finn and although the cats and Kai were all terrified of these funny little grubs, once Finn was running around and behaving like a proper little puppy, he and Ooc became firm friends. They played endless games of chase, hide-and-go-seek and even wrestle until eventually, Finn got too big to play gently enough.

Ooc is our FOMO cat.

If something is going on he is there in the thick of things sniffing things, hanging around, batting at things he finds and watching the goings on. At night he will come and worm his way between Vincent and I on the couch while we watch TV and in wintertime, he squeezes into the gap between us in bed and no amount of pushing and urging will persuade him to move. He loves playing with his ball and will pick it up and carry it around. He torments his sister at times until she hisses at him and sits glaring with ears pulled back and lashing tail. If you scold him he will just look at you with this innocent expression as if to say ‘What?’

Ooc LOVES food and will do a lot to earn a pellet. His favourite trick is ‘Salute’ and all you need is a tasty treat in hand to get him to show you. His favourite activity is to hang around the dam next door chasing insects and smelling all the interesting smells.